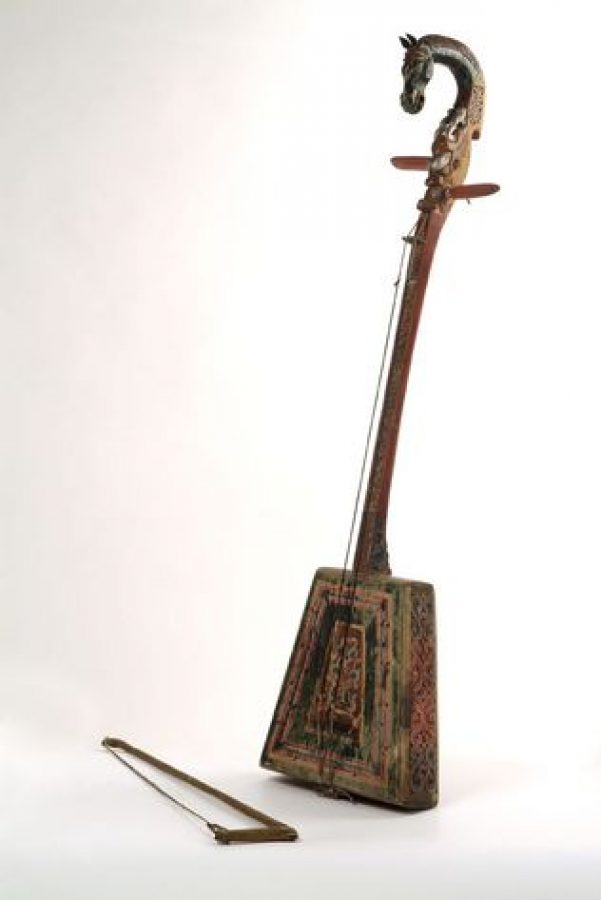 The morin khuur  or moriny tolgoit khuur: horse-headed khuur- is a violin with two strings with the head of a horse at the end of the neck.
The resonator box generally has a trapezoidal shape, a round-shaped resonator box being very rare. Two strings of the tail of horse run from the end of the spike at the base of the resonator box, to the tuning pegs above the two bridges, one in the resonator box and the other smaller through the neck.
The strings are called nariin -thin- and büdüün thick-, but also they are known as male and female. The thin string has about 105 tail hairs from a mare, while the thick one has around 130 tail hairs from a stallion. The strings were usually tuned with a fifth apart, but today there is the tendency to tune them a fourth apart. Its range is three octaves.
The playing technique varies from one region to another, but generally the index and middle fingers of the left hand play the strings from below that is, with the flat surface of the nails-, while the annular and little finger play the strings from above. The instrument is played with a bow also made of horsetail, the tension of which the player can adjust while playing.
The morin khuur is used to accompany both songs of fables as well as legends and the song called urtyn dun long-. In the west it is used to play tatlaga melodies that refer to animals or birds and produces a repetitive tone with a regular rhythm to dance bielgee. It is also used to play a particular melody of camel shepherds, by which they persuade the mothers to suckle their young.